Cancer
What is happening in the climate is happening within us, individually and collectively. The rapid rise in global temperature, melting ice caps and loss of forests that we see in the world around us is being mirrored within ourselves and our culture.

Chinese medicine’s holistic view of the world allows us to see clearly the connection between the small picture of our individual lives and the big picture of the condition of the climate.

According to research from the American Cancer Society, for those of us now living in the United States about 40% of us will be diagnosed with cancer—that’s over 120 million people with a cancer diagnosis. And over 20% of us—over 70 million people–will die from the disease.

Rather than being separate issues, the condition of the planet and the state of our inner ecology are intimately connected. The sobering statistics about the rates of cancer diagnoses and death and the equally sobering data about increasing greenhouse gases, melting ice sheet and deforestation rates speak to the same issues happening on different scales.

Using a holistic eastern lens, we can see that the overgrowth of unhealthy cells and rapid destabilization of the climate both speak to what Chinese medicine calls an excess of heat. For us individually, heat is about overstimulation physically, mentally and emotionally. Over time, this can eventually create an overgrowth of unhealthy cells which can move around the body, as with cancer.

Heat on a global scale means increasing temperature, more storms, and more unstable weather, as has been documented in great detail by climate science for several decades. It’s not a coincidence that as the planet heats rapidly so many of us will be diagnosed and potentially die from the condition. The connection between cancer rates and the climate crisis is the diagnosis of heat.

Coffee
One of the most stimulating things we ingest in the United States is coffee. Research by the beverage industry estimates that Americans drink over 150 billion cups a year.

For several hundred years, Chinese nutrition has understood that coffee has little, if any, value as a food. Contemporary Chinese medicine scholars and practitioners have also expressed similar experiences from their clinical practices, and my clinical experience indicates that coffee can contribute to and even cause a long list of symptoms. These include a wide range of gastrointestinal issues, anxiety, heart palpitations, headaches, night sweats and hot flashes, and an overgrowth of unhealthy cells. 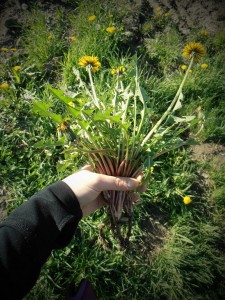 If we’re going to address the underlying causes of the climate crisis, it’s essential for us to understand what’s heating and destabilizing our internal climate. Replacing coffee with cooling alternatives like green tea and dandelion is not only good medicine for us individually, it is an important remedy to address the root causes of climate change.

For a detailed discussion of the heating and over stimulating effects of coffee and replacements like green tea and dandelion, see chapter 4 of The Yin and Yang of Climate Crisis. For more detail about the connection between coffee and the root causes of climate change, please see chapter 9.

For a video of Brendan Kelly discussing a Chinese medicine view of cancer, see below.