First published in the newsletter of the Florida State Chinese Medicine Association as an introduction to a class Brendan is teaching at their conference August 13, 2021

In the long history of Chinese medicine, many traditions have developed that emphasize different diagnostic and treatment perspectives. In my clinical experience, one of the most interesting and effective is the Wai Ke.

Primarily understood as a practice of external medicine, it is a well-developed dermatology tradition able to treat a very wide range of skin conditions. Less well known, but equally important, is that the Wai Ke tradition is also very effective in treating neurological conditions of all kinds. And the connection between the dermatological and neurological is the diagnosis of wind.

While the emphasis is on external wind with dermatology, with neurological conditions the focus is on wind internally. And while there are other issues connected to conditions affecting the brain, having a place to start—namely looking for wind—can clarify the diagnosis and treatment process

The Wai Ke tradition also includes many insightful ideas on addressing both root and branch issues. One is that internal wind—which causes symptoms like tremors, twitches, seizures and migraines—can originate from external wind. In other words, a wind heat or wind cold condition that starts on the surface can progress internally and create chronic, neurological symptoms. From this view, the effective diagnosis and treating of superficial pernicious influences is a way to prevent more significant neurological conditions.

Another important idea is that with neurological symptoms being association with wind, in addition to treating the wind itself it’s important to understand deeper, underlying issues. Using the Wu Xing/Five Phase tradition as a lens, we can see how the wind that is associated with the Wood phase can come from issues in the Water. Looking at the Sheng Cycle relationship between the two, the overstimulation that is internal wind can be affected by a deficiency in the Water. Specifically, a lack of Kidney Yin can result in an excess in the Liver because if the Kidney is dry this lack of fluids can create blood deficiency. And as part of the nature of blood is to relax the tendons and ligaments, when there is a lack of this softening influence tremors and twitches can occur.

Along with Yin deficiency in Water contributing to an excess in the Wood, a lack of Qi in the Kidney can also contribute to internal wind. Another part of the relationship between the two phases is that the Kidney provides a downward root to the upward-rising nature of the Liver. If the Kidney Qi is deficient, the Liver can become excess, again creating internal wind.

Another interesting and in my experience very important understanding in treating wind comes from the disease progression theory of Bian Hua/To Change and Transform. It describes how internal wind can be part of a process, where one imbalance can create others. The four parts of the progression starts with some basic Chinese medicine theory as the first stage of heat creates the second stage of dryness. This lack of fluid creates the third stage of phlegm. This excess of fluids occurs when the body is compensating for the lack of healthy Yin by creating or holding on to pathological Yin in the form of dampness.

Because of the nature of phlegm, which often creates stagnation, the body can respond by trying to promote movement through generating internal wind, the fourth stage of the progression. This dynamic of a lack of movement—coming from the stagnation from phlegm–creating an excess of movement—which is internal wind– can describe the creation of the diagnosis where these two conditions become one dynamic in wind phlegm. And what Bian Hua can also show is that this wind phlegm can come from heat and dryness.

In my clinical experience, the reaction of heat, dryness and phlegm creating internal wind can have real world clinical significance in treating sometimes hard to address neurological conditions. Based on both pulse and tongue diagnosis and signs and symptoms, many patients I treat with the migraines and vertigo associated with late-state Lyme and the tremors and twitches of Parkinson have part or all of the four stage progression. This can indicate that in order to effectively treat the neurological overstimulation that is the internal wind other parts of the progression will likely need to be addressed. In other words, heat, dryness and phlegm may need to be treated specifically if internal wind and the associated symptoms are to be resolved effectively. 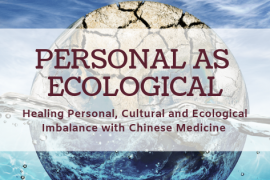