One accessible way to begin to understand the state of our internal environment is Chinese tongue diagnosis. Our tongue is an external map of what is happening to our internal organs.

Just as it takes fortitude to look at the voluminous amounts of data that tells us unequivocally that the climate is rapidly destabilizing, looking at the information our tongue provides also requires conviction. A tongue that shows internal balance is pink, smooth on the top and sides, and without any colored coating or cracks. For many of us, our tongues won’t look like this, indicating various degrees of physical, mental and emotions imbalance. Just as avoiding the scientific consensus about what is happening to the climate won’t make the issues go away, ignoring the information our tongue provides won’t help with our health and healing. And the rapid warming and destabilizing of our planet is reflected in the often significant issues shown on our tongue.

Below is a picture of the tongue and the organs that correspond to each section. After looking at the picture, take some time to look at your tongue, noting the color, coating, texture, size and shape. 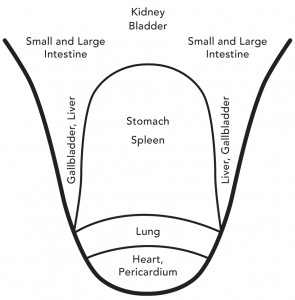 To begin to understand what your tongue is saying about your health and condition of your organs, use the information below.

Coating: When there’s a healthy balance of moisture internally, the tongue has a slight, clear coating.

Texture: When the organs are in balance, the tongue is smooth and flat throughout its entire length and width.

Size/Shape: A tongue indicating internal health is evenly rounded at the front and has a consistent width and thickness.

For more information about tongue diagnosis, including what the different tongue qualities indicate about the condition of specific organs, see chapter 10 of The Yin and Yang of Climate Crisis.