The metaphors we use speak to our assumptions about the world. Whether we’re addressing a diagnosis like cancer or the condition of our rapidly warming planet, speaking about waging warfare can seem like an important—even heroic—way to rally people to the cause. But seeing the condition of our cells and the state of the climate in terms of conflict does little to encourage us to look at the bigger issues that affect our internal well-being and the root issues of climate change.

Author, environmentalist, and fellow Vermonter Bill McKibben just had an article published in the New Republic. He urges us to see melting ice caps, the recent historic flooding in Louisiana, and the myriad of other issues of climate change as a war that we’re losing. As he mentions and as I write about, we see other issues as requiring a similar approach to inspire commitment and marshal resources to win the battle, hence the war on cancer.

While the language of medical and climate warfare may come from the best of intentions, seeing the condition of the planet through a lens of conflict reaffirms the imbalances that are creating climate change. Using the holistic view of Chinese medicine and its understanding of Yin and Yang, we can begin to recognize that long-lasting sustainability requires peace.

From several thousand years of continuous practice, Chinese medicine has developed deep reaching insight into how to promote personal health and environmental sustainability. As one of the oldest existing traditions, Yin and Yang are fundamental to Asian culture and medicine. As the white and black aspects of the Yin/Yang circle suggests, different parts of our lives—and by extension different aspect of our culture—maintain health through balance.

The white part of the circle is Yang, which is associated with heat, the external, newness, and having more. The black of the Yin is about coolant, the internal, agedness, and having less. As Western climate science has demonstrated conclusively for several decades, the planet is rapidly heating, indicating an increase in Yang. More recently, the science also suggests that the ability of the planet to maintain its coolant is decreasing. Deforestation, ocean acidification, and melting permafrost are all decreasing the planet’s ability to hold and sequester greenhouse gases.

Along with this excess of warmth/Yang, and lack of coolant/Yin in the climate, we have this same imbalance in our culture. We’re encouraged to value new over old, more over less, and the external over the internal. We’ve even created whole cultural systems based on this imbalance. Our economy, for example, is based on this belief that the Yang pursuit of the new and of more is, by definition, better than the Yin pursuit of owning fewer and older things.

In addition to the ecological effects of the constant making and buying of the next new thing, there are equally important effects to our internal environment. Part of the result of being encouraged to constantly want more things is the loss within us of the Yin of the contentment for what we already have. For so many of us, this Yang excess also manifests as the need to constantly be doing something rather than developing more comfort with simply being.

Equating climate change with warfare is a reflection of this same overemphasis on Yang. Using analogies of troop advances, saboteurs, and the strengthening of the enemy to describe melting ice caps, floods, and greenhouse gas emissions is approaching an already overheated condition with more Yang. In essence, it’s attempting to fight fire with fire. Not surprisingly, with an understanding of Yin and Yang, we can recognize that adding heat to an already overheated condition creates more of the same.

Seeing climate change as a war does not encourage us to look at the fact that what is happening in the climate is also happening within us. Warfare is about conflict, fighting, and defeating an enemy. A call to arms to fight climate change leaves out insights about how, just as the planet overheats while its ability to maintain coolant decreases, we’re encouraged to value Yang over Yin. Rather than seeing climate change as being something that is happening only in the world around us, Chinese medicine can help us see that this same imbalance is also happening within us.

We don’t need to wage war to address climate change—we can wage peace. In talking about addressing global warming as winning a war, we’re neglecting the opportunity to understand what promotes well-being. On a cultural level, this includes the peace of an economy based on balance rather than the constant pursuit of the new. Personally, it’s the peace that comes from having enough Yin internally to be satisfied with the quality of our lives rather than the constant pursuit of more material things. 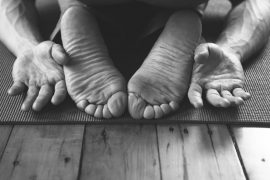